skip to main | skip to sidebar

HINDRAF,Where is it heading?? - Part 1 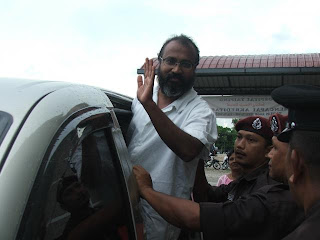 Glad to be back....
After the Tsunami election,this is my first post in this blog!!
And here i want to discuss about HINDRAF!!
Where it is heading??
None of us would forget the earthquake that HINDRAF brought into Malaysian politic scenario by the November 25 rally!!
The racist UMNO leaders,tried very hard to manipulate our Malay brothers and sisters against Indians in this country!!Yet they failed in their attempt,cause Malay leaders such as Anwar and royal blogger Raja Petra knows what the rally is about and they pledges their full support to HINDRAF's fight!!
Failed in their first attempt to crush HINDRAF's fight against social injustice,Malaysian Govt launched their second wave of the crushing effort by arresting HINDRAF leaders under ISA in look a like "Operasi Lalang".They describe HINDRAF as threat to national security.This led to nationwide prayer-meetings in Temples!!The long-standing BN loyalist Indians got their political awareness which led to Political Tsunami on March 8.BN lost it's 2/3 majority in Parliament,and lost 5 states+ FT-KL to Pakatan Rakyat(4 of the states are where most Indians are living,Perak,Penang,Selangor,and Kedah).One of HINDRAF leaders,who've been detained under draconian ISA has won Kota Alam Shah state seat in Selangor!!This shows that,people rejected "HINDRAF IS NATIONAL THREAT" idea!!
But,still Abdulah is crying that HINDRAF is national threat,and his longstanding loyalist Syed Hamid Albar,heading tough task in his reign as Minister of Home Internal Affairs!!
They are not ready to accept the people's decision!!
Always claiming to have "Big Ears" to listen people grouses,which is deaf,Abdullah failed as a national leader.
And current uproar in Malaysian Indian community is about health condition of Uthayakumar, de-facto leader of HINDRAF!!Reported that Uthaya is denied proper meditation!!And his health condition is getting worse while,the camp official claims,"Uthaya is alright".But,inside of every indian,we know that our hero is not fine!!And recently there were protest rally all around the nation to show our dissatisfaction against this human crime committed by Malaysian Goverment.
He fought for our rights,and the price that he paid for that is too much!!
On the other side,Waythamoorthy the Chairperson of HINDRAF who is living in self-exile in London was shocked with the revoke of his passport.This will force Waytha to back to Malaysia,where he'll be arrested under ISA,and put together with other HINDRAF leaders!!
This is the clear picture that is on going that everyone of us are aware of,there are some other issues about HINDRAF that we are unaware of.
Where's HINDRAF heading......
-To be continue-
Posted by தமிழ் பெயரில்லா தமிழன்(SATEES) at 10:47 PM

I DEDICATE THIS BLOG TO THIS 5 HEROES OF MALAYSIAN INIDIANS...

FOR THE BETTERMENT OF OUR COMMUNITY,OUR 5 LEADERS ARE IN DETENTION CAMP,TRUTH WILL WIN,MAY GOD BLESS THEM....

Please do support www.urimaipor.blogspot.com as you support this blog.

Best Rated BLOGS/WEBS in my view....